• in Philosophy of Quantum Mechanics

Why is he so important for science and philosophy, for our knowledge, to understand why and how we produce new ideas, to think, to be and to know how to be by being and non-being?

Parmenides was born and lived in Elea (today it is Velia in Italy as in the first picture) between 510 and 435 BC. You can see where it is in the link below:
Elea School of Parmenides


The Eleatica was a pre-Socratic school of philosophy founded by Parmenides in the early 5th century BC in the ancient town of Elea. For the ancient science and philosophy this school is very important, and the ideas from those moments have been desired and containing argument even now. Most of the physicists and scientist influenced from him, and considered his ideas.

For Einstein, Parmenides was an influential ancient Greek philosopher, admired by Plato (who refers to "father Parmenides" in his dialogue the Sophist).

Parmenides advocated the puzzling view that reality is unchanging and indivisible and that all movement is an illusion. Erwin Schrödinger identified Parmenides' monad of the "Way of Truth" as being the conscious self in "Nature and the Greeks". Recently Frank Anthony Wilczek (an American theoretical physicist, mathematician and a Nobel laureate) wrote about him in his book "A Beautiful Question." 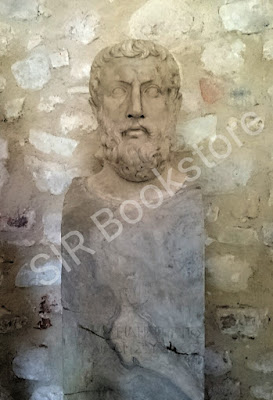 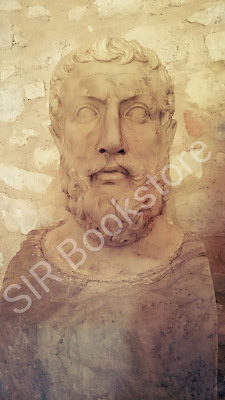 He was sent on a diplomatic mission to Athens in 450 BC to convince Pericles to sign a treaty of alliance.  Apparently the philosopher, accompanied by Zeno's disciple, spent more time to deal with his peers, including a young Socrates, who among politicians. Of this meeting Plato (his book namely Parmenides) made a report, which shows the bitter dispute dialectic.

You see below what it is written in the museum of Parmenides (in Elea) for the explanation about him.

(Stele with inscription for Parmenides, with head-portrait attributed to the philosopher)


What is written on the statue?


What is written near the statue? 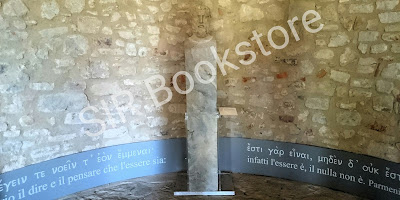 And needed saying and thinking that being both
in fact it is and nothing not.


According to Parmenides, thinking involves being, that if I can think of something then it exists. Basically if I thought a ghost, then it exists, because somehow, just by thinking about it I gave him a meaning, even if only in my brain.

What is not, it cannot be the thought of nothing. Not being is the set of things visible to our senses, while Being is the true nature of those same things. Being is the thing itself , but not the appearance, like painting of Rafael for instance. Painting is the Being, not its apperance.

Aletheia:  (Ancient Greek: ἀλήθεια) is the truth or disclosure in philosophy. Aletheia is the goddess of Parmenides. It was used in Ancient Greek philosophy and revived in the 20th century by Martin Heidegger.


``From Parmenides' poem: Fr.14`` : Recognizes that the moon shines with 'borrowed light'. His own cosmological theory even today it's true. In the poem, the goddess warns against mortals who know nothing.

Parmenides describes how the goddess who dwells there welcomed him upon his arrival:

"And the goddess received me kindly, and in her hand she took/ my right hand, and she spoke and addressed me thus:/ “O young man, accompanied by immortal charioteers/ and mares who bear you as you arrive at our abode,/ welcome, since a fate by no means ill sent you ahead to travel/ this way (for surely it is far from the track of humans),/ but Right and Justice." (Fr. 1.22–28a) 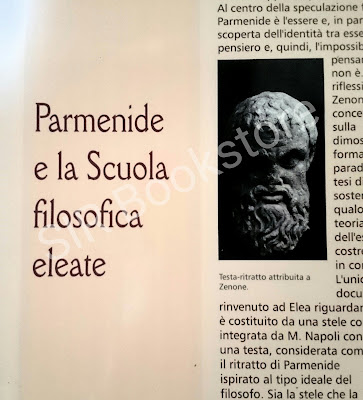 Zeno of Elea was an ancient philosopher who lived before Socrates and Plato. Zeno's teacher was Parmenides.He is still famous with his paradoxes. One is Achilles and the Tortoise.

From the book, Parmenides by Plato.


When we came from our home at Clazomenae to Athens, we met Adeimantus and Glaucon in the market-place. Adeimantus took me by the hand and said, “Welcome, Cephalus if there is anything we can do for you here, let us know.”

Parmenides by Plato
My rating: 5 of 5 stars


View all my reviews

We can think because our mind is capable of identifying. Parmenides, 26 centuries ago, taught us that to be and to think is the same thing. The exact essence of this Parmenidean assertion was repeated by Einstein last century.